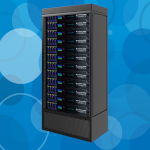 Yes, you have read that right, what on earth do you do with THAT MUCH of storage and RAM?

OK, my ‘Data’ Drive is a mere 10TB (only 1/2 is actual data) and so to have a backup that needs to be utilised at a moments notice, it means having another 10TB Drive.

There is also the 1TB HDD for  Virtual Disks for my Virtual Machines, and these are Gigabyte hungry too. Speaking of, now let’s move over to RAM.

20GB RAM…. too much? I will now break it down, I have the actual physical server which only needs about 2-4GB to run efficiently. As I’m running virtual machines, these need to be allocated RAM, this is the run down at the moment:

So once broken down, you can see that it is being utilised. So why VM? It’s cheaper! £160 for 16GB RAM gave me TWO new machines running as Client/Servers, I want to add more, so I have legroom to test/learn.

Add this with using Raspberry Pis where a physical machine is needed, it does keep the cost down when running a home IT setup!